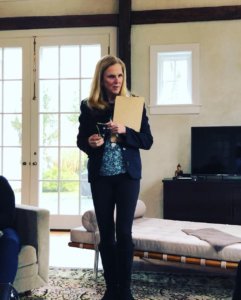 She was walking down the street in NYC on her way to work, when her legs seized up and she fell to the ground. How did this event immediately change the course of Sheilah Croawley’s life and how did she pivot to find a path forward?

Sheilah began as a photographer working in Vermont and then transitioned to City Harvest in New York City. “At that time, it was the largest nonprofit food rescue organization in the country, operating with a budget of $30 million and handling 35 million pounds of food.” Sheilah had a big job and was in charge of first getting the excess food brought in from all over the country. Then she worked to provide underserved New Yorkers access to fruits and vegetables in their own neighborhoods. When her boss took a leave of absence due to an illness, Sheilah was left performing the duties of two jobs.

“I loved what I was doing, but the stress brought on the symptoms of a diagnosis that I had received 22 years prior – MS.” When she fell to the ground that summer morning she realized, “My life had changed forever in that moment. I knew I would have to leave my job.” The emotional toll was immediate, “I felt stripped of my identity. The pride in my work with City Harvest and my role as an executive all evaporated into thin air.”

Now what? Sheilah was floundering and at a loss at how to move forward. “I called my mom in a heap of despair and she had an idea.” Her mother wanted to have a “summit” with Sheilah’s sisters, believing that at a moment of import or crisis, you need to call in your community, or tribe of supporters to help you make a plan.

With her mother and two sisters, Sheilah had a summit where the four women gathered to figure out what Sheilah needed and how to get it. “With the men gone in WWII, the women would get together and help each other move forward. This was the same kind of thing.” 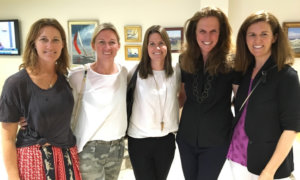 What came out of her summit was that Sheilah would focus on her health for the next year. Her mother and her sisters came up with the idea for Sheilah to work with a coach who would guide her to health and her next step in life. “I never felt such levity. Women are never given this kind of permission to focus on themselves, we’ll keep our heads down forever.” SO TRUE!!!

Sheilah discovered over the next year that she wanted to offer this kind of support to others who needed guidance to find their true purpose, so she began her journey to become a coach. She now offers Summit services to women who want to find a path that aligns with their strengths, values and lifestyle. “I meet women where they are in life and help them move forward in a positive way.”

Her first client came through a friend. “I was able to help this woman find her purpose and build her life and work around it. I offer a bridge to the other side.” Sheilah guides women to take an inventory of who they are and what talents they possess, and then use those things to map out the future. She says her Summit helped her so much that she wants to share the same gift with others, and she knows that this is her purpose in life.

VentureMom Tip
Have a summit experience to thoughtfully map out your future.