My favorite piece from April Marin is the Ruffled City Shawl in over 15 colors. Get yours today in the VentureMom Marketplace.  It’s my first choice for the VentureMom Lifestyle Product Line!!!

She used her minor in fashion when she initially got out of college and it came into play later. April Bukofser landed a job working pr for several clothing lines right out of school. She was involved in everything from setting up for events to selling at sample sales. She even had to dress celebrities like Scarlett Johansen in Cynthia Rowley’s line. Then a move to the suburbs came and she left the fashion world for a job in finance. 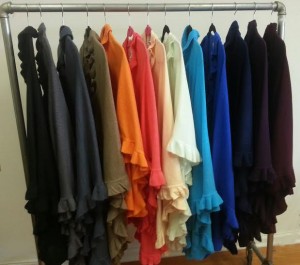 Marin Milio had been in event planning for MTV prior to leaving New York City. She then took a job at a sports marketing firm. Both women, who had met in college, had day jobs but wanted a project to break up the monotony. “When we first met, we promised we would work together one day. Marin and I decided to make dresses for ourselves an

d maybe try to sell them to others.” The pair had a friend with ties to seamstresses in Vietnam. Friends and family loved their designs and April and Marin launched a custom dress business in their spare time. “We named our new business using our first names, added shawls to the line and had house parties to sell our products.”

Then a big thing happened. “We set up a table at a show in New York for magazine editors and met the producer of the Today Show. She said she wanted to showcase our shawls on the show. We both had day jobs and didn’t watch much morning tv so we weren’t sure what was involved.” The producer told them to be ready, “We had no idea what would happen.” Turns out after the show they got orders for 16,000 shawls. Now what? “Marin called me and said something’s wrong with our PayPal. We called the computer guy and he said your account is going up by the $1000s so it’s working. I sat in the preschool parking lot for 2 hours making calls to get things together.”

April and Marin had to scramble to fulfill this massive amount of new business but it validated that they had a viable venture. “It was shear chaos for a few weeks working to get everything shipped but we learned so much.” AprilMarin then had a local launch party that got some press and Marin says, “My boss called me into his office and asked me about it. I told him it was a hobby and he said ‘it doesn’t look like a hobby.'” Marin’s firm did a soul searching life plan type exercise for its employees and Marin realized April Marin wasn’t just a hobby. She went back to her boss and told him he was right and her heart was really with her own business. The two had a laugh over the whole thing and Marin left her job.

April left her day job as well. As the business and their children grew, April and Marin found a fulfillment center, “There was no way we could take delivery of that amount of merchandise in our homes.”

It was 2013 and April and Marin decided their next move was to get an office with the goal of selling wholesale to stores. “It was great to have something that we could build on as our kids got older and as we had more time.” They attended their first trade show and got orders from 25 stores. The two women wanted to continue to grow so they began to attend more and more shows. April Marin products are currently in over 200 stores nationwide. “We just hired a rep from Dallas who has her own relationships with stores and can help us scale.”

The two women usually work between 10 and 3 when their girls are in school and both say they love their business and the flexibility it provides. What advice would they have for would be entrepreneurs, “Hone in on a niche before you expand and get the business model organized.” Marin says, “It’s so exciting to see someone we don’t know on the street wearing something from our line.” The two want to go on Shark Tank next , with their drive and determination, who knows where we’ll see them.

Tracy Fox had the entrepreneurial spirit early and took her father’s lead.  Although he owned a seat on the New…

Ever think about taking a kayak tour with girlfriends in the moonlight?  How about a yoga class on a paddle…

One day, Jessica found herself wandering aimlessly around the supermarket, and came to the realization that she was desperate to…